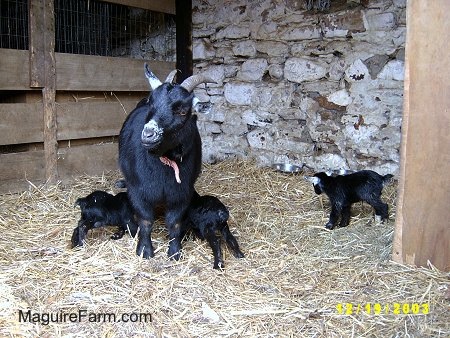 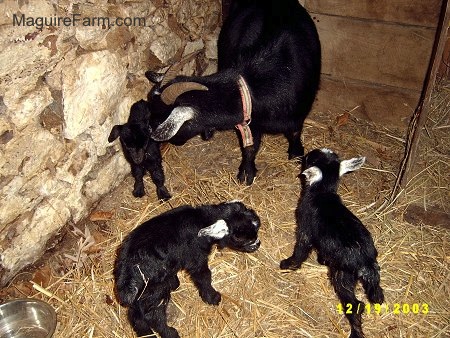 Blackie had her babies on the morning of December 19th 2003. I looked out into the field and noticed Tacoma inside the goat shelter Blackie usually stays in. Tundra walked over to Tacoma and Tacoma growled at Tundra and would not let him in the goat house. It was odd for Tacoma to be growling at Tundra. Knowing Blackie was due any day and Tacoma being in the shelter Blackie preferred to be in I knew something was up. I walked over to the gate and Tacoma did not come out of the house to greet me. I knew something was REALLY up! When I looked into the house there were 3 baby goats in there with Tacoma. Blackie, the mom goat, had gone off to eat breakfast. I am not sure how long Blackie was gone, but it was long enough for one of the kids to think Tacoma was her mommy. She was trying to nurse from Tacoma. Tacoma was keeping the goats warm until Blackie came back from eating, it was only 29 degrees outside. I needed to get the kids and Blackie to a separate stall. By this time Blackie had come back. I carried two of her kids to the stall. I had thought that if I carried her last baby and led Blackie on a lead she would come willingly. WRONG!! She did not want to leave the herd. I lured her out of the pasture and part way to the stall with her kid. HOWEVER, she decided she was getting too far from her flock.I needed feed to lure her the rest of the way, but I could not get to it. So what's one to do when they are stuck in the front yard holding a newborn kid and stubborn Mama by a lead who will not budge.... CALL STEPHEN and PIPER!! (Luckily I had the phone with me, I could not remember George's phone number without looking it up). I called Stephen at work and Piper was not home, but I left her a message. I kept trying and trying to get Blackie to walk. Seemed I would be there for quite a while. Just then Piper showed up, got the feed and we were on our way. Stephen showed up and we all got the goats settled in the stall. 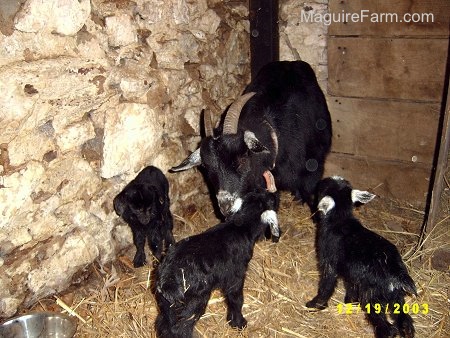 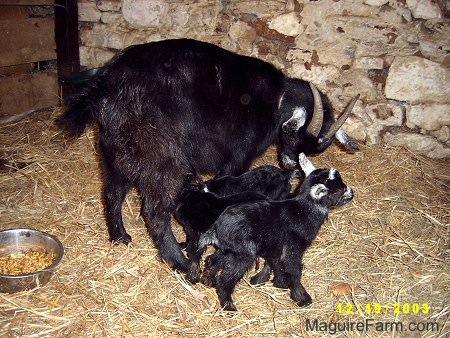 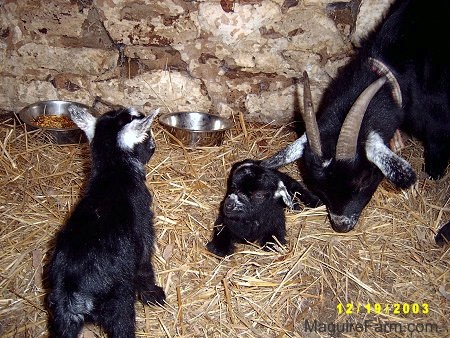 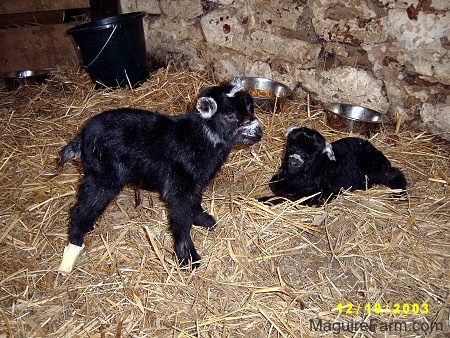 This little goat is named Sweet-Pea. We noticed one of her back hoofs turned under when she stood, making her stand on the top of her foot, rather than her hoof. At first I thought it was broken, but realized it wasn't. Piper helped me wrap the leg to help her stand on her hoof. She seems to be doing well. We plan to remove the tape in a couple of days to check her progress. 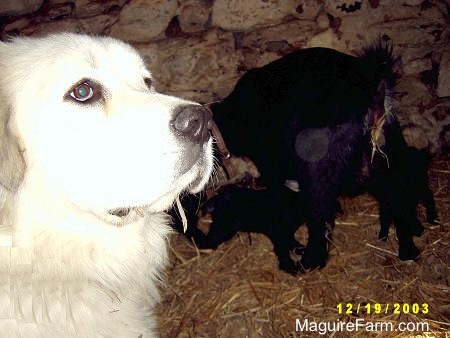 Tacoma visiting the goats inside the stall.