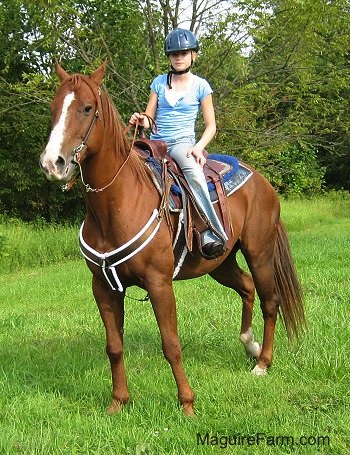 Amie on Jack, the Mexican Stock Horse, which is equivalent to the American Quarter Horse. These pictures were taken right after we brought Jack home. Since then he really filled out. Gained weight and a lot of muscle. 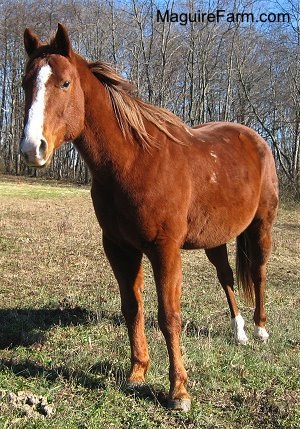 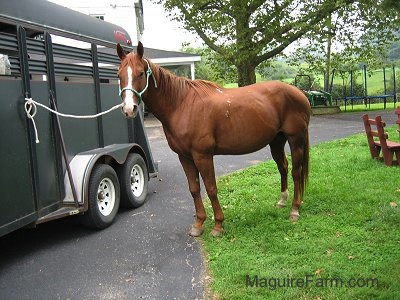 This is Jack when he first arrived at the Maguire Farm in Sept. 2006. In this picture Jack is 16 years old. He is a Mexican Stock Horse, which I believe is a cross between a Quarter Horse and a Mexican Mustang. Jack originally came from Mexico. From Mexico he was sold to some cowboys in El Paso Texas. We believe Jack was used out west to round up cattle or some type of similar work. He's 100% neck reined, meaning the rein only has to touch his neck in order to steer him in the right direction. The goats didn't faze him in the least. In fact nothing seems to faze him. Even Katie's run away basket ball that bounced up and hit him in the stomach didn't spook him. Katie also did cartwheels in front of him and he just watched her. When we first got Jack he didn't know what treats were. It appeared he had never been hand fed, he would not even take an apple. A few molasses cookies shoved into his mouth changed everything. Jack will now gently take food from your hand. 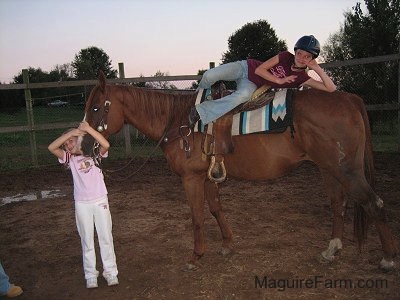 This is Jack the day we looked at him for the first time. Phil, the guy who sold him to us rode him first. I was impressed with the way the horse listened to every command. Phil lassoed a bucket a few times while riding Jack, than Phil dropped the reins and lassoed Jack's neck while still on his back. He than proceeded to steer Jack using only the lasso. Jack jogged around the ring doing whatever Phil asked him to do. Left, right and even stopping with only a lasso, no bit, just the feel of the lasso lightly touching his neck. I was so impressed with him, especially with the way he tolerated the kids I could not help but buy him. Stephen was not with me. I had to call him on the phone and break the news, "Stephen, I'm buying a horse, ok?!" It was my birthday, he couldn't say "No" on my birthday! ;-) No one really knows what Jack's original name was. When Phil got him he called him Horhay, which means Jeorge in Spanish. 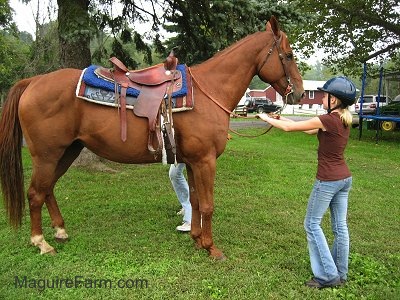 From what I have been told, horses often pick one person who they strongly bond to. They get used to a rider, the rider and the horse learn body language and both start to know what to expect from one another. In Jack's case that someone would be Amie. He listens best when its her on his back. We had a ferrier come out and do Jack's feet. The ferrier asked Amie to run Jack around the driveway. Amie loosely held the lead rope and ran with him, much like you would walk a dog. Jack ran with Amie leading in front, when Amie came to a stop Jack stopped immediately right beside her. There was a lot of slack in the lead, Amie was barely holding it. Honestly I don't think Amie even needed a lead rope. Jack would have followed her anyway and he would have stopped when she stopped. Jack often lowers his head to her height so she can hug his head. When you look at Jack up close you can see evidence of his many years of strenuous hard work. I believe Jack enjoyed his work in his younger years, but the years of work were catching up with him. What more could a retired horse want than to be spoiled by a 12 year old kid who adores him. 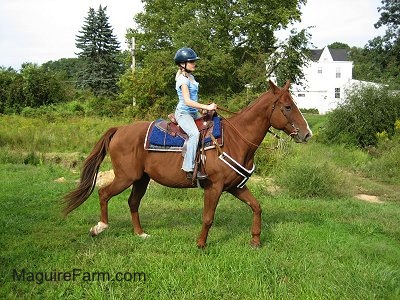 Katie and Kristen helping Sara get up on Jack. Amie holding Jack. 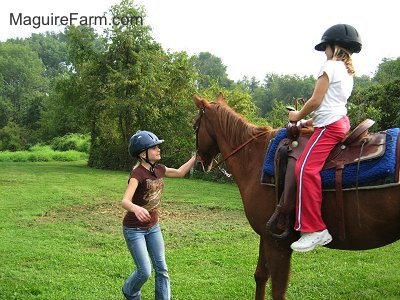 Sara testing Jack out for the first time. Jack is one of the calmest horses I have ever met. I have yet to find something that spooks him. Jack has really taken to Amie. He behaves perfectly for her and is very gentle with her, in return Amie is gentle with him. They make a perfect team! 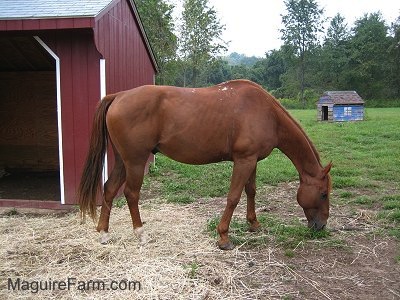 Jack needs to put on a few pounds, no worries, we'll fatten him up in no time! 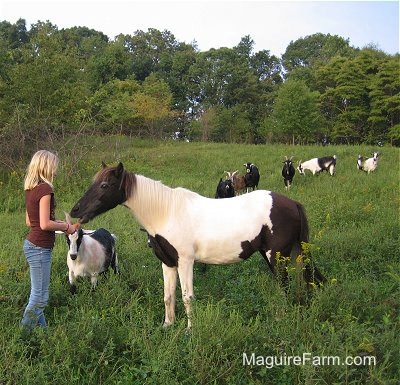 What about Jazzmine you ask? Jazzmine is still trying to get used to Jack. She has been living with a herd of goats for 2 years now. Ever since Jack came she has been rounding up her goats and getting them away from Jack. She will even trap a goat inside one of the shelters to insure it does not walk off with Jack. The first few days Jack was here if he got to close to Jazz, she would snicker, snort and sometimes try to kick him. Jazzmine just needs some time to get used to Jack. We speeded up the process by moving the goats to the lower yard. Horses are herd animals, with some extra love and attention she'll bond with Jack in time. I had always been told female horses and ponies are more temperamental than males. Jazzmine has showed me just what they mean by that. ;-) Jazzmine is now Sara's pony. She's currently taking riding lessons.

Update: Jazzmine LOVES Jack. If Jack is out of her site she gets very upset, runs around full speed like someone's trying to kill her, neighing her stress call, chasing goats in an upset way wanting her Jack back. She wants Jack in sight at all times. I think she's bonded a little too much. 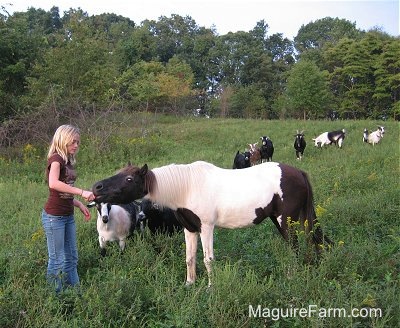