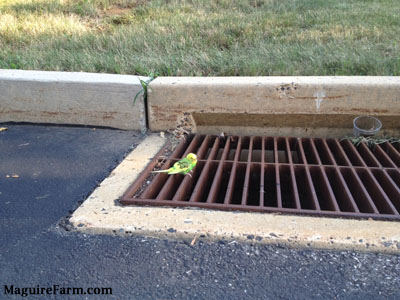 My mom and dad were riding their bikes one evening when they spotted a little yellow and green bird sitting on top of a storm drain. Oh boy that little bird definitely was not meant to be wild in this part of the country. It could possibly live free outside during the summer months but come fall there was no way it would survive, especially come winter. Poor little guy was lost. 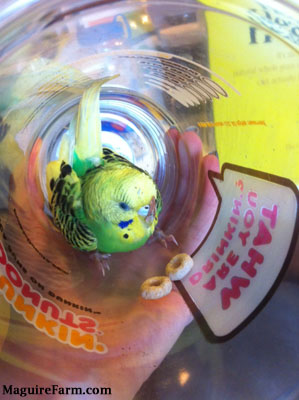 I usually despise litter on the side of the road but this time the litter came in handy. They got a large soda cup that happened to be on the ground and after several attempts was able to catch the bird. 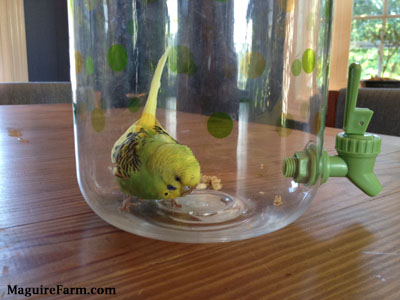 They took him home and put him in an ice tea container while my mom found a temporary hermit crab cage out in the barn. Then we were off to the pet store to find a real bird cage. 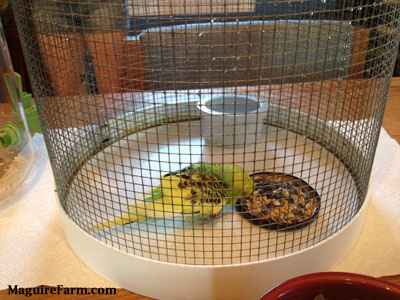 The next couple hours were dedicated to getting Sprite a real bird cage with a bunch of bird toys. As we assembled the newly bought bird cage, Sprite was quietly watching from his temporary cage. He didn't make much noise if any at all. Who knows how long this little guy was out in the wild or the last time he had fresh seeds and water. The cage was finally set up with all the new toys, perches and mineral blocks. When I reached my hand into the hermit crab cage to transfer Sprite from one cage to the next he jump all around tweeting his dislike for my hand. I finally got a hold of him and gently lifted him from the hermit cage. "Ouch! Hey, don't bite my finger! I'm saving your little life here buddy.." Once Sprite was in the new cage he settled down and watched us again. It will take some time for him to get used to his new home. 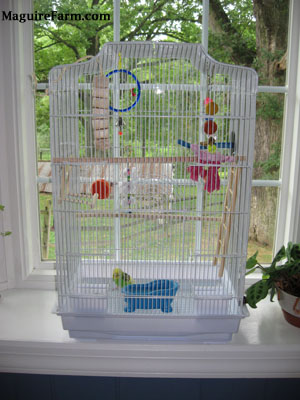 "Well, Sprite, you have a pretty good view from this window sill." 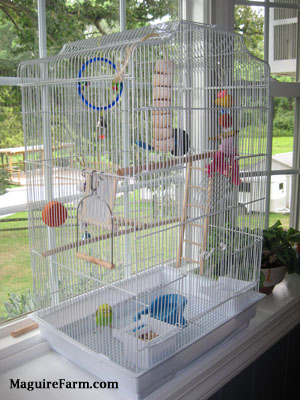 We made sure to fill Sprite's cage with plenty of toys for him to play with and different perches to fly to. Parakeets are social creatures and it's best to keep them at least in a pair. Poor little Sprite only had us humans to keep him company right now. I talked to my mom and she agreed that since parakeets are very social, it would be a good idea to get Sprite a friend :).

The next morning, Sprite still looked kind of lonely. He was just sitting on his perch looking out the window. My dad had said we should wait a couple days before getting another one because we don't even know if Sprite will live or not but my mom convinced him to just get another one now before he became territorial over the cage making it harder to introduce another bird. Better sooner than later ;). So it was off to the pet store! There were many birds to choose from but we wanted to get a blue one that matched Sprites temperament which was calm and relaxed. Most of the birds were flying around and chirping away except this one little blue parakeet. He was still flying from branch to branch but he wasn't chasing away other birds. 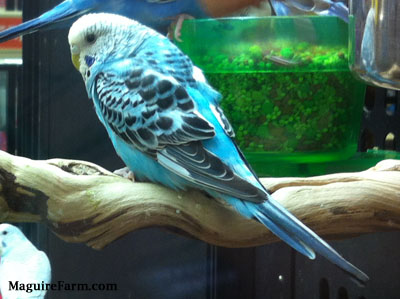 We bought a small temporary cage for the new bird to sit next to Sprite until they got used to each other. When introducing a new bird they should be separated but next to each other so they have a chance to get acquainted. 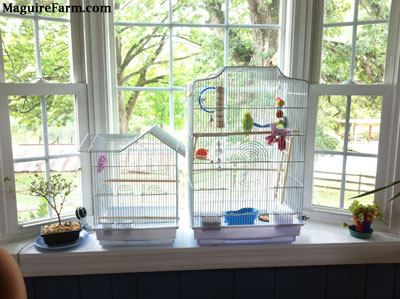 After further deliberation, the name "Click" was chosen for the new parakeet. He and Sprite would have side by side cages for thetime being. Getting Click in his cage was more painful than Sprite. He was taken home from the pet store in a cardboard box and when It was timeto put him in his cage I reached my hand in and gently lifted him. He started Tweeting and Chirping in protest and then CHOMP! Right on my finger and he twisted the pinch of skin he had in his beak.. "Ouch! Hey! Stop you little..." Luckily he was in the cage before I finished my sentence. 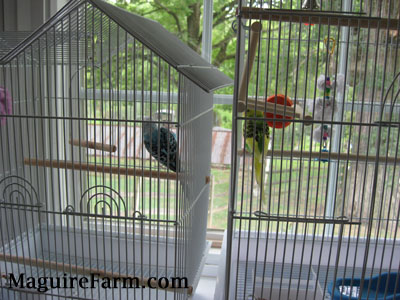 Right away Sprite perked up and was interested in the new bird who at first was flying around like someone was harassing him. Click settled after a minute on the side of the cage and Sprite slowly shuffled his way down next to him. It wont be long till they are moved into the same cage.